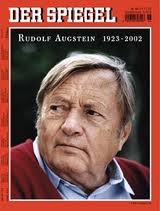 The Incident: Der Spiegel, in the October 8, 1962 issue, published an article called "Bedingt abwehrbereit" ("prepared for defense to [a] limited extent"). At 9 p.m. on October 26, 1962, Der Spiegel's offices in Hamburg were seized and (together with the houses of several journalists) searched by 36 policemen, and thousands of documents were confiscated. The offices would remain shut down for weeks. Augstein and the then-editors-in-chief Claus Jacobi and Johannes Engel were arrested and charged with treason. The author of the article, Conrad Ahlers, who was vacationing in Spain, was seized in his hotel during the night. Augstein would be jailed for 103 days. This was orchestrated, it later came out, by Strauss, the Defense Minister.

Results of Incident: On November 26, the police ended its occupation of Der Spiegel's offices, while Augstein, Ahlers and three others remained under arrest — Augstein until February 7, 1963. In December 1962, Adenauer formed a new cabinet without Strauss. This effectively ended Strauss' political career.

On May 13, 1965, the Bundesgerichtshof (highest German court of appeals) refused to open trial against Augstein and Ahlers, ruling that during the affair Strauss had violated the boundaries and committed Freiheitsberaubung (deprivation of personal freedom). But Strauss was never prosecuted.