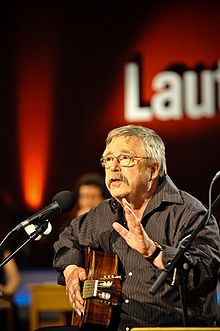 Description of Artwork: Biermann, primarily a song-writer, is known for his criticism of the GDR's government. His poem The Wire Harp charges leading members of the Socialist Unity Party with corruption and preventing the advance of socialism.

The Incident: Biermann performed in a poetry reading organized by the Academy of Arts in 1961 where he offended members of the SED, who blacklisted his work. In 1963 his first play, Berlin Bride was prohibited and his theater group, Berlin Workers' and Students' Theater (b.a.t.), was closed. Biermann was refused membership in the SED and banned from publishing for the next eleven years. He avoided censorship by publishing outside of the country. When he left the GDR in 1976 to perform a concert in West Germany, East German officials withdrew his citizenship.

Results of Incident: Three weeks after the Berlin Wall fell in 1989 Biermann performed his first concert in East Germany in almost 25 years.