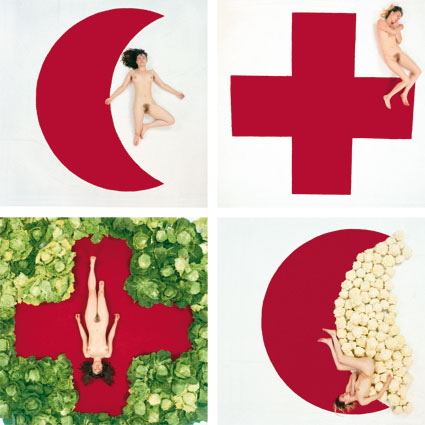 Description of Artwork: Katarzyna Kozyra's photo-piece called Blood Ties was intended to be exhibited publicly on billboards. It consists of four square photographs. Each of the photos is of a naked woman, the artist herself or her sister who has an amputated leg. The backdrop is of a red cross or crescent. On the bottom two panels the cross and crescent are surrounded by either cabbages or cauliflowers. The billboards were meant to bring attention to the suffering women went through during the Kosovo War, especially during religious clashes. The cross and crescent symbolize the religious clashes as well as the relief organizations who provide aid to war victims. The women are posed to appear as casualties.

The Incident: In 1999 Katarzyna Kozyra's piece "Blood Ties" was scheduled to be shown on billboards in Poland. The media soon became aware of what was about to be exhibited and began contacting Catholic organizations and municipal governments to see if they would object to the piece. This became a call to arms and the artist was forced to blue-pencil the nude women so that the cross and the crescent became indecipherable. Only the panels with the cabbages and cauliflower were allowed to be shown. The objection to the piece was that the photographs made unholy use of religious images--that the nude women profaned the cross and crescent.