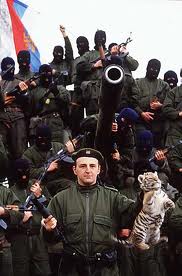 Description of Artwork: The exhibition, Blood and Honey, consists of photographs taken on the battlefields of the former Yugoslavia.

The Incident: During the opening of the exhibition the protesters many wearing T-shirts with the slogan "Radovan Karadzic - Serbian Hero" greeted visitors with shouts of "Traitors!" and nationalist catch cries. Police arrived quickly on the scene but did not react as the protesters, mostly young men in black shirts, hurled insults at visitors to the exhibition. This is the third in a series of incidents related to Haviv's work. A group of about forty people disrupted the exhibition in Uzice on June 5, protesting that the battlefield photographs were anti-Serb. A month later, in Cacak, a group of skinheads burst into the opening of the exhibition and attacked organiser Ivan Zlatic leaving him seriously injured.

Results of Incident: The organisers told media that an agreement was reached to postpone the opening in order to avoid a major confrontation.