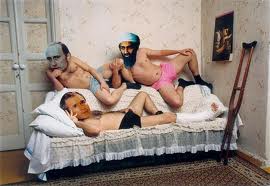 The Incident: Matthew Bown, a British art dealer, was detained by Russian customs for approximately nine hours after officials discovered the photographs. He was questioned about who made the pictures and about the Marat Guelman Gallery in Moscow (from where the works were on loan).

Results of Incident: Five of the eight photographs were confiscated. The officials explained that they could not allow images portraying heads of State in a derogatory manner to leave the country. Bown said the confiscated pictures would be reprinted in London and the exhibit would continue as scheduled. And it did.