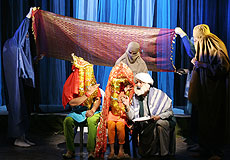 Description of Artwork: "Burqavaganza" is a satirical play that mocks Pakistani radical muslims, as well as the burqa: religious attire that completely covers a woman's body. Every character in the play, male and female, wears a burqa, which is meant to be an allegory for hypocrisy.

Results of Incident: The play was performed one additional time after the ban, when Ajoka scheduled another play to be performed, and then switched back to Burqavaganza at the last moment. Otherwise, all productions have been stopped.