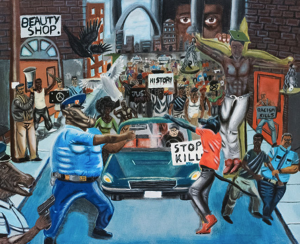 The Incident: In the spring of 2016, David Pulphus, a St. Louis Missouri high school student, was chosen as a winner in the annual Congressional Art Competition for an allegorical painting depicting a scene of protest against police violence. This painting was displayed in a public passageway leading to the U.S. Capitol building. Republican representatives took the painting down without permission, but Representative Lacy Clay, a representative from Pulphus' district, restored the painting to its original location each time it was removed. The Architect of the Capitol made the final decision, siding with Republican representatives who argued that the painting broke the art competition's guidelines which prevented works that depict "subjects of contemporary political controversy." Rep. Lacy Clay released a statement saying that the painting's removal has "sent a chilling message to young Americans that their voices are not respected, their views not valued, and their freedom of expression is no longer protected in the U.S. Capitol."

The statement expressed the organization's dissent for the removal of the painting and the many ways in which the removal chills our right to the freedom of artistic expression. "Removing the work sends a message to young people- and everybody else- that they should not depict the world around them for fear of offending our political representatives."

Two of the country's leading legal professionals, Lawrence Tribe and Erwin Chemerinsky have agreed to work pro bono on behalf of Congressman Clay and Pulphus. Tribe said that "these flagrant and repeated acts of unauthorized government censorship threaten the very fabric of an open society committed to freedom of expression under the First Amendment."

In mid April, a federal court ruled against artist David Pulphus and Democratic Missouri Congressman William Lacy Clay. This final judgement is a victory for the Republican representatives who opposed the painting and wished to have it permanently removed.

In May, Pulphus and Congressman Clay filed an appeal. The case was argued in September, and on Nov. 30, 2018, the D.C. Circuit dismissed the lawsuit as moot because the 2016 art competition—and its corresponding Capitol exhibition have ended—so there was no longer any injury for the court to redress. In its opinion in Pulphus v. Ayers, the court rejected Pulphus’s arguments that the case continues to present a live controversy, finding the case moot.