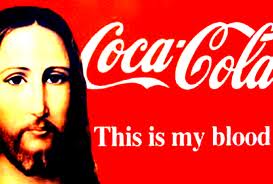 Description of Artwork: The exhibit, Caution-Religion shows several images of Christ. One image presented Christ with a road sign instead of a face; another had an icon of Christ with openings in the face and hands, so visitors could put themselves in the icon and take photos; another featured a crucified woman with an icon of the virgin Mary between her legs. 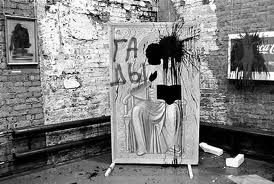 The Incident: Caution-Religion opened on January 14, 2003, in the Andrei Sakharov Museum and Social Centre in Moscow, a museum known for sponsoring human rights related exhibitions, but was not publicized until several days later. Shortly after a Moscow newspaper reported it's content, protesters marred the exhibit with paint and slogans such as, "blasphemy," and, "you are damned." Russian police charged six people with "group hooliganism." However, the publicization of the incident and exhibit brought negative attention from church leaders and believers. Moscow's municipal prosecuter's office recieved more than ten thousand letters requesting that the state charge the Andrei Sakharov Museum and Social Centre with "inciting of national, racial and religious hatred."

Results of Incident: In response to the negative attention drawn to the museum by the exhibit, the Sakharov Museum and Social Centre directors decided to close the exhibit and apologized to those offended by the works. The charges against all but one of the artists were eventually dismissed. Anna Alchuk weathered a 5 month humiliating trial in 2005 where the judge acquitted her. However, her mental state deteriorated and three years later she committed suicide.