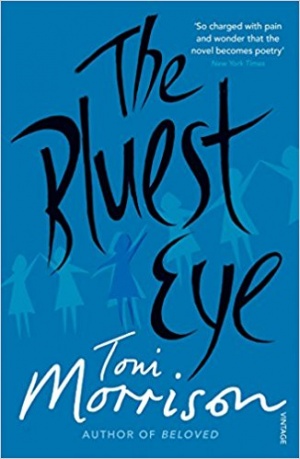 Description of Artwork: The Bluest Eye is a 1970 novel by American author Toni Morrison. It is about a year in the life of a young black girl, named Pecola, who develops an inferiority complex due to her eye color and skin appearance in Lorain, Ohio, against the backdrop of America's Midwest as well as in the years following the Great Depression. It was published by Holt, Rinehart, and Winston in 1970.

Because of the controversial nature of the book, which deals with racism, incest, and child molestation, there have been numerous attempts to ban it from schools and libraries.

The Incident: In Indiana: Due to inappropriate and controversial sexual content and graphic language that is in the novel, the State School Board has challenged The Bluest Eye and tried removing it from the curriculum.

In Alabama: Also concerned about the sexual content in the novel, a legislator in Alabama has challenged The Bluest Eye to be removed from an Alabama school's curriculum.

In Colorado: The novel is on the reading list of the AP curriculum in Broomfield, Colorado. Parents concerned about the book's explicit description of racism, incest, and child molestation, has caused some parents to write a letter as a way to take action to have it removed. Others still think it should be left on the reading list though because it exposes students to people and lives that they have nothing in common with.

Results of Incident: The book has not been banned in Indiana or Alabama, and it has been restricted in the 11th grade AP curriculum in Colorado.