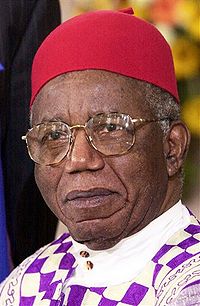 Description of Artwork: Achebe has been expressing his criticisms of the Nigerian government through radio and literary commentary throughout his life. His most notable experience with censorship came in 1988 when he suggested that a veteran politician, Obafeni Awolowo, was not a great national leader and did not deserve a state funeral.

The Incident: Achebe has been threatened throughout his career as a journalist and creative writer. Nigeria's attorney general and minister of information threatened Achebe while he was controller of the Nigerian Broadcasting Corporation of the eastern region of Nigeria. The government officials accused him of biased reporting during the country's first elections free of British rule. Achebe also worked with the eastern Nigerian seccessionists, the Biafran Organisation of Freedom Fighters. Achebe has completed numerous literary works. His first, Things Fall Apart (1958), describes the harmful effects of colonialism on Nigeria's culture. A Man of the People (1966) was his first major literary work that described the corruption rife within the Nigerian government. All of his works, both fictional and non-fictional, address corruption and social issues in Nigeria and other African dictatorships. While Achebe received numerous threats, his work was not censored until 1988.

Results of Incident: In 1988, after Achebe made the critical comments about Obafeni Awolowo, the western Nigerian states banned his work.