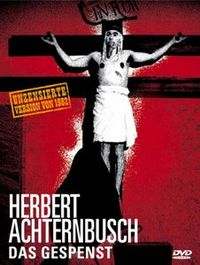 Description of Artwork: Achternbusch's film, Das Gespenst (The Ghost), shows Jesus stepping down from his cross, confronting religious stereotypes and cliches, and wandering through the streets with a nun, having sundry surreal experiences.

The Incident: Das Gespenst was celebrated at the Internationale Hofer Filmtage in Hof, Germany in 1982; however, religious groups disagreed to the film's content. In April 1984, the FSK, a semi-official government film-rating organization, denounced the film and threatened to withhold a payment promised to Achternbusch because the film "injured religious feelings and human dignity." In 1983, Munich's public prosecutor took action in response to 2,000 complaints against the film, influenced by the European Citizen's Initiative for the Protection of Human Rights and Dignity. The prosecutor responded by confiscating the film and accusing the film distributor of slandering a religious community. In Austria, the film received similar opposition. The film was confiscated and screenings were cancelled.

Results of Incident: In Germany, charges against the film distributor were dropped because the film was supposedly "too weak" to be considered a work of art, and incapable of disparaging anyone. A German court ordered Achternbusch's subsidy paid, suggesting that artist's lives depend on government commitments. Although the German ministers of education and science and research opposed the ban, confiscation of the film and companion book was enforced. In Austria, author Gerhard Ruiss went to trial for screening the film: he paid a fine and spent 25 days in prison. Achternbusch appealed to the Austrian court in 1989, however his request to lift the ban was denied.