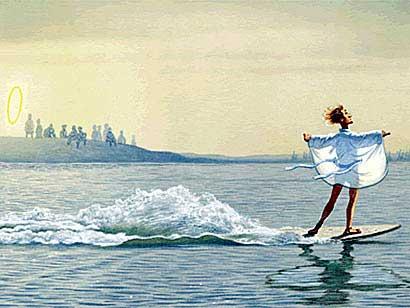 Description of Artwork: An illustrated religious satire about Jesus' life. Haderer portrays Jesus as a happy friend of Jimmy Hendrix or as a surfer, sliding over the smooth sea.

The Incident: In 2005 the illustration book The life of Jesus was published in Greece and the drawings caused a furor in some Greek circles. Actually, Haderer, a native and resident of Austria, did not even know that his book was published in Greece until he received a summons to appear in the Athens court in January 2005 accused of blasphemy. Although Das Leben des Jesus had caused an uproar in Austria upon its initial publication in 2002 and the Roman Catholic Church attempted to organize a boycott of the publisher, it was not censored there and Austria refused Greece's request for extradition.

Results of Incident: Haderer was sentenced to 6 months to 2 years in absentia, but, on appeal, was exonerated. The distribution of his book was then allowed in Greece.