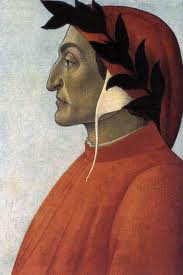 Description of Artwork: Dante's De Monarchia (The Monarchy) was written as an attack on the papacy and called for the restoration of imperial rule in Italy. He felt this was the only solution to Italian factionalism. Dante also argued that church and state were separate and independent. His most controversial statement in the book was his argument that the authority of the emperor came directly from God and did not need to be mediated by the pope.

The Incident: There were two factions fighting for control of Florence in the 13th century--the Guelphs and the Ghibellines. Dante was born into a Guelph family and when the Guelphs took control he was elected to be one of the six governing priori. The Guelph party was also split between the "whites" and the "blacks". Dante was a "white," who was condemned as being hostile to the pope. On a visit to the pope, the blacks took control of the government and Dante was charged with corrupt use of public money. His sentence was to be burned, so he never returned to Florence. This is what caused Dante to write De Monarchia. In 1328, six years after Dante's death, the book was condemned by cardinal Bertrando de Poggetto. The first censorship of De Monarchia was the burning of the book in 1318. Dante's work was also burned in the "bonfire of the vanities" in 1497. Fifty years after that De Monarchia was placed on the Index of Paul IV and the Tridentine Index.

Results of Incident: Challenges to papal authority became more commonplace during the Reformation, but the Papal states would remain until Napoleon dismantled them in the early 19th century.