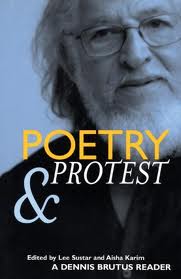 The Incident: Brutus' troubles with the South African censors began when he was fired from his teaching position under the Suppression of Communism Act because of his involvement with the Trotskyite Teachers League of South Africa and the Unity Movement. He became a journalist but was banned from publishing and joining any organizations. He served 18-months in prison for violating his banning order.

Results of Incident: Brutus left South Africa to practice journalism and teach around the world. He also published several volumes of his poetry internationally. Brutus was allowed to publish in South Africa in 1988.