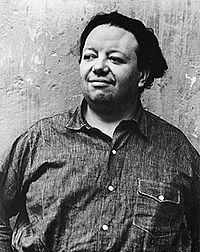 Description of Artwork: Rivera's paintings often make political statements or depict political figures. In many cases, these displays of art are deemed inappropriate in the public setting.

The Incident: "On May 22, 1933, Rivera was called down from painting his unfinished Man at the Crossroads that he was commissioned to paint by Nelson Rockefeller. He was handed a check for $14,00, the balance of his fee, and informed that he had been dismissed for depicting Lenin. Within 30 minutes the mural had been covered by tarpaper and a wooden screen.

In 1936 in Mexico City, Alberto Pani, political figure and financier, commissioned Rivera to paint a Mural at the Hotel Reforma. Rivera's anti-capitalist and politically cynical compositions, put Pani in what he felt was a compromising position, both toward the foreigners to which he was catering and to the Mexican political structure. Pani kept quiet until the murals were completed and Rivera was paid for his work. He then had one of his brothers come in and alter the murals until they were acceptable. A court battle ensued when Rivera was informed of this.

In 1952 Rivera's painting, The Nightmare of War and the Dream of Peace depicting Joseph Stalin, Mao Tse Tung, and saints was to be included in a Mexican art exhibition in Paris. The Mexican government did not approve of the piece and chose to exclude it from the exhibition

Results of Incident: "Seeking a compromise, Rockefeller suggested that Rivera should replace Lenin with some unknown face; the artist offered to add Lincoln but refused to expunge Lenin. Charged with willful propagandizing, he declared only that 'All art is propaganda.' Since he had accepted his payment, Rivera was unable to force the Rockefellers to exhibit or even keep his work. The mural was subsequently removed from the wall..." The Encyclopedia of Censorship, J. Green, Facts on File, pg. 254

From the court battle with Pani Rivera was awarded 2,000 pesos in damages and allowed to restore the murals. Pani, however, who owned the murals had the panels removed and placed in storage where they remained for twenty years. They were later sold and are now displayed on the walls of a Mexican tourist agency.

Rivera's painting was withdrawn from the 1952 exhibition.