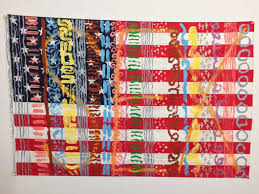 Description of Artwork: Disappointing Patriotic Sex Paintings is a series of five paintings by Philadelphia-based artist Renny Molenaar. He was invited by Dora Espinoza, independent curator and guest curator at The Belskie Museum of Art & Science, to partake in the exhibition, AMERICAN DREAM: The Latino Experience in America. Here, works by immigrants and first-generation American citizens part of the Latin American diaspora were displaced.

The museum approved the five paintings from Molenaar’s series, which feature painted US flags that were created in response to the current political climate and to shed light on the urgent plight of immigrants and deportees.

The Incident: Two days prior to the opening, the board agreed to remove Molenaar’s paintings from the exhibition as they incorporated actual US flags, which they stated is "contrary to The United States Flag Code".

NCAC wrote a letter to the members of the board, urging them to restore the paintings and issue a public apology to the artist. They highlighted that the US Flag Code was ruled unconstitutional in United States v. Eichman, 496 U.S. 310 (1990), rendering their decision a "violation of free speech under the First Amendment". Incorporating US flags in an artwork is a form of speech that is fully protected under the US Constitution, as is the desecration of the American flag.

Results of Incident: The Belskie Museum of Art & Science immediately responded and agreed to restore the five artworks by Molenaar to the exhibition. NCAC thanked the museum’s Board of Directors for reversing their decision and offered its resource, Museum Best Practices for Managing Controversy. This includes strategies for preventing or defusing potentially volatile situations, and encourages museums to address sensitive issues of civic engagement.