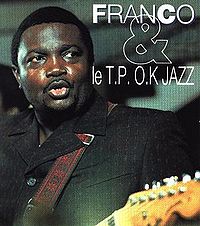 Description of Artwork: The two songs that attracted the most attention from the government were the songs "Helene" and "Jacky". These songs condemn "free women". The language in these songs is provocative and obscene. Franco talks about the women's dirty appearances, their inability to please a man, and their venereal diseases. Another song that had been censored in 1958 by the Belgian colonial officials was the song "Mukoko", which is about personal liberation.

The Incident: In 1958 Franco's first experience with censorship occurred when his song "Mukoko", about freedom, was withdrawn from sale by Belgian colonial officials. In 1965, five years after Zaire won independence, the repressive Colonel Mobutu ordered the public execution of five dissident intellectuals. Franco's song "Luvumbu the Sorcerer" was a commentary on these executions. The song was banned as soon as it was released and copies not only in Zaire, but also in Europe, were hunted down. Franco walked a thin line in Zaire, not many dissidents could escape the persecution of Colonel Mobutu. His popularity helped keep him out of prison. However when "Helene" and "Jacky" were released Franco was ordered to explain himself to the attorney general. Franco said he did not think the songs were obscene and his mother was called in to make the judgment. Predictably Franco's mother was shocked and the songs were banned and Franco along with the other 10 members of his band OK Jazz were sentenced to two months in prison. In addition Franco had to return his medal for the Ordre National de Leopard, Zaire's top honor.