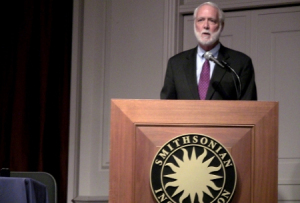 Description of Artwork: This incident refers to the 30 minute video created by David Wojnarowicz in 1987. It was displated at a National Portrait Gallery exhibition.

The Incident: Smithsonian Chief G. Wayne Clough is remembered to have pulled a portion of a 30 minute 1987 video by David Wojnarowicz (this portion called "A Fire in My Belly") from a National Portrait Gallery exhibition in 2010. This portion showed a crucifix with ants crawling on it. The move caused critics, especially the Association of Art Museum Directors, to call his action one of censorship.

Results of Incident: Clough announced that he will resign from the Smithsonian in 2014.