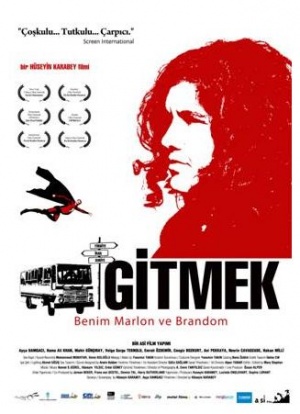 Description of Artwork: The film Gitmek- My Marlon and Brando chronicles a love affair between Hama Ali Kahn and Ayça Damgaci. From his Kurdish village, Hama Ali sends Ayça video love letters which he has filmed on his handycam. She watches them from her sofa in Istanbul, with her cat for company. The video love letters capture the hellish violence engulfing Iraq, the goats and uncles populating his rural area, and also his tender affection towards her. Feeling suffocated by her own city and angered by the indifference towards the war that surrounds her, Ayça decides to make the journey eastwards to Iraq to be reunited with her lover.

The film based on the true story of Ayça's departure from Istanbul and her extraordinary journey to the Iraqi border. At a time when many people were fleeing from East to West in search of safety, Ayça makes the opposite journey, in search of love. She is helped by immigrant artists who live in the slums of Istanbul and the mothers of long distance truck drivers who she meets at various border towns. The journey takes her through breathtaking landscapes, strange encounters and terrifying times.

The Incident: The film was to be shown at the Switzerland Culturespace Festival but was taken out of the festival program at the very last minute, at the request of an officer from the General Directorate of Promotion Fund, on the pretext that "a Turkish girl cannot fall in love with a Kurdish boy" as was the case in the film. The officer threatened the festival organizers with withdrawal of sponsorship totaling €400,000.

Results of Incident: The festival could not risk losing the money and took the film out. Although, independent movie theatres in Switzerland disagreed and screened the film independently of the festival.