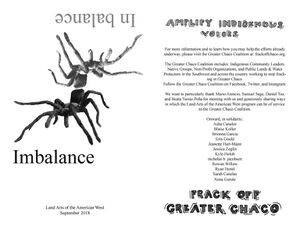 The Incident: In 2018, a group of University of New Mexico students spent a week exploring oil and gas fields in New Mexico and created zines based on their experiences and what they observed. The students also met with members of the Greater Chaco Coalition during the week of the program, and the Greater Chaco Coalition also helped to promote the students’ zines. A curator at the New Mexico Museum of Art asked to include copies of one of the students’ zines in the Museum’s “Social and Sublime: Land, Place, and Art” exhibition.

Results of Incident: The New Mexico Museum of Art returned the zines stating that the zines could not be included in the exhibit due to a limited space. Legal counsel for the New Mexico Secretary of Cultural Affairs Debra Garcia y Griego stated that “All the poetry in the zine relates to what would unmistakable [sic] be interpreted as political commentary on fracking” and thus, the Museum, as a public institution, could not politically promote the Greater Chaco Coalition. Additionally, curators minimized the space allotted for the “Social and Sublime” exhibition in order to expand the space of another exhibition so that the zines could not fit in “Social and Sublime” even after the legal issues were settled.