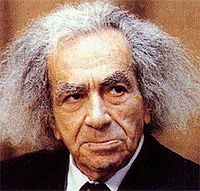 Description of Artwork: Faludy's translation of Heinrich Heine's Germany: A Winter's Tale describes Hitler as a "bloodsucking leader." Faludy was also censored because of his poems, which were critical of communist and democratic governments alike.

The Incident: Faludy's translation of Germany was banned in Hungary. During World War II none of his work was published in Hungary and his books were burned and pulped by the pro-Nazi Hungarian government.

Results of Incident: After being imprisoned in 1946, for alleged espionage, Faludy fled Hungary. He was able to teach at Columbia University, attain Costa Rican citizenship and publish worldwide.