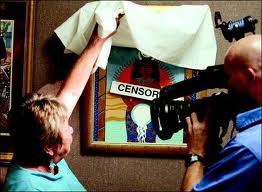 Description of Artwork: Five nude paintings. One called, Hathor, features an Egyptian goddess pouring milk from her breasts into the Nile River. None of the paintings contain full nudity: two show the nude form from behind and three others are of the waist up.

The Incident: Tom Coburn, Nevada County's general services analyst called for the removal of the paintings. Coburn's supervisor, the director of general services, Richard Reader, supported the decision. The artists were told to take their works down from the exhibit. A few of the pieces were rehung, covered and labeled "CENSORED." Subsequently the County Board of Supervisors decided to cancel the whole show. The exhibit was scheduled to continue through October 30, 2003.

Results of Incident: The exhibit was cancelled, but later moved to The Center for the Arts, another local venue, to be put on display in full.