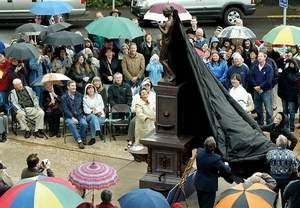 Description of Artwork: The statue is of the Greek goddess Hebe. She holds a cup in one hand and a jug in the other, which is supposed to contain ambrosia. She is also wearing a dress that leaves one breast exposed. She stands over a water fountain. The statue is a replica of an original Hebe statue, which was erected in 1908 by the Women's Christian Temperance Union, in an effort to encourage the community to drink water instead of alcohol. The original statue was toppled by runaway horses in 1912, and not replaced.

The Incident: Residents of Rosenburg became interested in replacing the Hebe statue as a nod to the town's history. Other town residents came out to oppose the idea however, saying that the statue was anti-Christian and associated with paganism and Wicca. The Douglas County Museum was planning an exhibit on Hebe to educate the public on her historical significance when county commissioners ordered the Museum staff to cease planning the exhibition, saying that it was "too controversial."

Results of Incident: The exhibition did not go on, although the statue was erected.