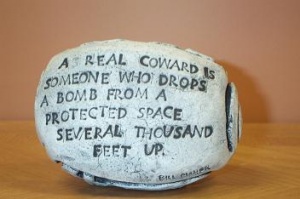 Description of Artwork: The piece was a part of an exhibit called "Conversations in Clay," which was on display at the city's cultural center. It featured ceramic stones, with quotations about war and peace on them. The offending stone featured the following quote from Bill Maher: "A real coward is someone who drops a bomb from a protected space several thousand feet up."

The Incident: City Manager Mike Rock, with the support of three Lakewood City Council members, removed the offending stone from the art piece, citing what he claimed to be its anti-war, anti-military message.

Results of Incident: After a letter from the NCAC and action from the Colorado chapter of the ACLU, the piece was restored in its entirety and an apology was issued to the artist.