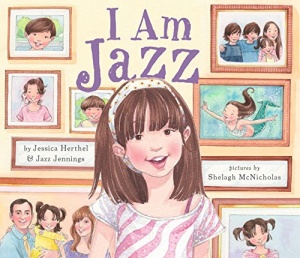 Description of Artwork: 'I Am Jazz' is a critically acclaimed children's picture book by author Jessica Herthel co-written with Jazz Jennings, with illustrations by Shelagh McNicholas, about a transgender girl. Jazz's story is based on her real-life experience and she tells it in a simple, clear way that will be appreciated by picture book readers, their parents, and teachers.

The Incident: In spring 2017, a transitioning kindergartner at the Rocklin Academy, California, selected Jessica Herthel’s 'I Am Jazz' as her choice for story time reading. The children’s book tells the story of real life transgender activist Jazz Jennings who struggles with having “a girl brain but a boy body.” Parents who considered the topic of gender identity too sensitive for kindergartners were distressed they had not been notified about the reading in advance. Some even threatened to sue.

Results of Incident: 9/15/2017- The National Coalition Against Censorship (NCAC) and 4 other organizations (Comic Book Legal Defense Fund, Authors Guild, National Council of Teachers of English and the Association of American Publishers) wrote a letter expressing concern that Rocklin school board was reconsidering their literature policy following the controversy. The groups urged the board to reject subsequent calls to restrict books that can be read in classrooms. The groups’ argued that in allowing reading of the book, Rocklin Academy lived up to California educational standards, which promote broad cultural literacy. The letter underlines that a decision to restrict books that cover certain subject matter, such as gender identity, will cast a negative light on that material regardless of its educational value. The board reviewed its literature policy on September 18th and voted unanimously to retain the policies that allow the book to be read in kindergarten. They adopted a provision to forewarn parents of potentially controversial subject matter.