I Want Your Love 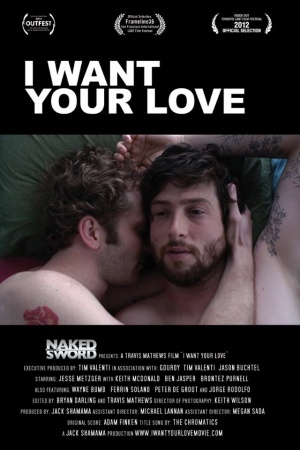 Description of Artwork: "I Want Your Love" is a gay-themed feature film directed by Travis Mathews, based on a 2010 short film of the same name. The film's plot follows a young gay man living in San Francisco who is about to give up his artistic lifestyle to move back to the Midwest. His friends throw him a party and make him question his desire to move on from this life and into the life of a young professional. The film contains at least one scene of relatively explicit gay sexuality and the movie is otherwise notable for its realistic style which captures what the filmmakers call "the uncensored zeitgeist of modern-day San Francisco."

The Incident: In February 2013, the film "I Want Your Love" was barred exemption by the Australian Classification Board to be shown in public theaters despite the film's "not rated" status. The ACB explicitly bars X-rated films from theaters, but films which are "not rated" can file for exemption in order to be screened at film festivals, which "I Want Your Love" did not receive. Because of the ban on the film, it could not be shown at the Sydney Mardi Gras Film Festival, the Melbourne Queer Film Festival, or the Brisbane Queer Film Festival.

The ACB cited their 2007 film festival guidelines which state: "If in the opinion of the Director, whether based on the synopsis, other material, inspection of the film, or any other grounds, an unclassified film would be classified X 18+ or RC [refused classification], the Director will not grant an exemption." Lesley O'Brien, the Board Director of the ACB, said in a statement that "the film contains detailed and prolonged scenes of actual explicit sexual activity," thus it would have received the rating necessary for the board not to grant it an exemption.

Many are saying that the incident is indicative of homophobic policy by citing examples of films which have passed the ACB's film festival guidelines previously. Speaking with Huffington Post, Travis Mathews, the film's director noted: "They allowed a film last year called 'Donkey Love' about beastiality in Columbia...In 2006, they allowed '9 Songs' which shows vaginal penetration, oral sex and ejaculation." He then said that while he can justify the film's explicit sex scenes thematically, the real point is that "this is an outdated method that is keeping a film of value out of Australia."

Results of Incident: The non-exemption was not overturned by the Australian Classification Board and the film was not allowed to be screened at the three film festivals at which it was slated to appear.

There was backlash within the Australian film community, however.

The Melbourne Queer Film Festival released a statement expressing their disappointment: "We're shocked that Classification Australia have taken this path. I Want Your Love has screened to critical acclaim at dozens of festivals around the world. Australia is the first film festival to have it banned. We're sorry our audience won't be able to make up its own minds about adult content." Lisa Daniel, the director of the Melbourne festival added: "the decision is an embarrassment for Australia."