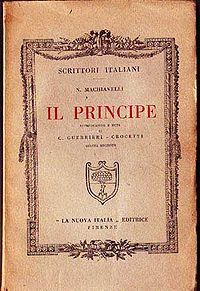 The Incident: 1576 France: Selected maxims from Il Principe translated into French, were attacked by the Huguenot Gentillet for their political views. Cesare Borgia was supposed to have been the "Prince". The author contended that "if all rulers were good, you ought to keep your word, but since they are dishonest and do not keep faith with you, you in return, need not keep faith with them."

1602 England: The Elizabethans derived from Gentillet their idea of and hostility for Il Principe.