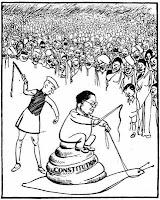 Description of Artwork: The political cartoon, drawn in 1949, depicts the illustrator's sentiments regarding the drafting of the Indian Constitution. The principal drafter, B.R. Ambedkar, is shown riding a snail, labeled "Constitution," while holding a whip. The Prime Minister of India, Jawaharlal Nehru, is seen standing behind the snail, whip in hand.[1]

The Incident: Following broad condemnation by the Indian Parliament, Kapil Sibal, the Minister of Human Resource Development, apologized and asked the National Council for Education Research and Training (NCERT) to remove the cartoon from, and stop distribution of, its textbooks. The government will also perform a general content-based review of the textbooks.[2]

Results of Incident: In addition to the apology from Sibal, two NCERT advisors resigned.[3] A day later, the offices of one advisor, a professor at the University of Pune, were allegedly attacked by persons claiming to be members of the Republican Panthers. The assailants were later arrested and charged with crimes.[4]

In April of 2012, a Jadavpur University professor was arrested after forwarding a email containing a cartoonish image of political leader Mamata Banerjee to his friends. Banerjee has been at the center of many recent controversies involving the chilling or suppression of information.[5]