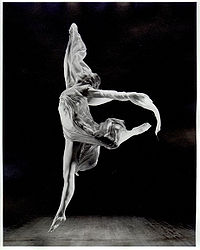 Description of Artwork: "She possessed no technique as we know it, yet combined simple steps, runs, jumps, and turns to express effectively her concepts of beauty and truth with a masterful understanding of choreographic form. In her dancing, Duncan rebelled against the bad ballet of her day. In her lifestyle, she protested the rules society placed on women and the laws governing marriage, divorce, property and child custody." Dance Magazine, (Book Review),September 1986

The Incident: After pro-communist remarks and exposure of her person during a Boston performance, Mayor James Curly prohibits her from performing in Boston again. (National Association of Artists Organizations) "When Isadora Duncan returned to the United States in October, 1922 after her triumphant appearances in Moscow, she brought back boundless enthusiasm for the Soviet system and a Russian husband almost two decades her junior. Her return was widely covered in the press because she and Sergei Esenin, her new husband, were briefly detained by the immigration officials at Ellis Island under suspicion of being "Bolshevist agents." (Simon Karlinsky, New York Times Book Review, May 9, 1976 pg. 3)

Results of Incident: "In a heady atmosphere of shock, this sensual, magnetic woman became the idol of royalty, students, musicians, millionaires and Red Russians. At her last performances in America, police stood onstage with "the Bolshevik hussy" to guard the peace. By the time she died at 49 -dying as recklessly as she lived- most of her ideas were being lived out by the youth of the 1920's" (Jack Hamilton, Look, 12-10-68, pg. 70)