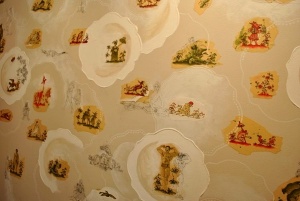 Description of Artwork: The controversial mural spanned 5 meters, the length of an entire wall. The artist, Jérôme Galvin, said the pieces were inspired by ceramics in the museum representing "grotesque and burlesque" figures "rich and well known"…"I portrayed, in a more contemporary manner, small figures, some of them nude, in ridiculous positions. One was a urinating aristocrat."

The Incident: Jérôme Galvin was commissioned to create the site-specific mural for the June 27, 2014 reopening of the ceramic museum in Moustiers Sainte-Marie. When the recently elected mayor, Patricia Burn, saw the images she called them "insanities, vices, and pornography." Galvin reached an initial compromise with the mayor's office, agreeing to put fig leaves on six of the contested images. Nevertheless the Mayor had the mural covered.

Results of Incident: Mayor Patricia Brun had drywall installed over the mural, completely covering the artwork before the museum opening.