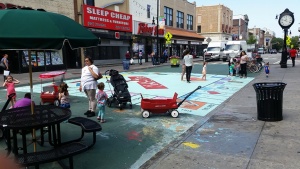 The Incident: Several elements of the mural drew complaints, and Wynans was asked to make changes during the painting installation, even though the design had already been approved. The “Jail” square on the board, which contained a cartoon self-portrait of the artist behind bars, provoked complaints from residents, including state Assemblywoman Angela McKnight, who saw not the artist's self-portrait but a negative stereotype about people of color (Mr. Wynans is Italian and Puerto Rican). McKnight and others demanded that the self-portrait be removed or changed. The City pointed over the Jail square and then, without consulting the artist further, they painted over the entire Monopoly Board.

Results of Incident: Despite receiving a letter from NCAC, the City painted over Monopoly Board without responding to objections.

33-foot, Jersey City-centric Monopoly board to debut on pedestrian plaza, By Terrence T. McDonald May 27, 2016