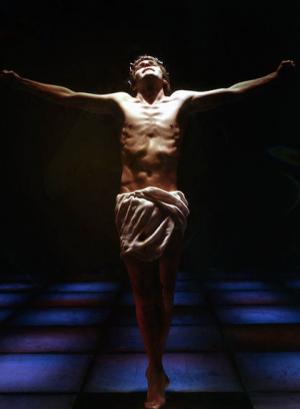 Description of Artwork: Jesus Christ Superstar is a rock opera written by Andrew Lloyd Weber and Tim Rice. The plot is loosely based upon the Gospels' accounts of the last week of Jesus' life, beginning with he arrival of Jesus and his disciples in Jerusalem and ending with the crucifixion. It portrays political struggles bettwen Judas and Jesus that were not explicitly mentioned in the bible. The piece offers a psychoanalysis of many biblical characters, but focuses mainly on Judas, rather than Jesus. The musical employs contemporary and modern techniques which make the biblical story current. They use slang and ironic allusions to modern life and include many intentional anachronisms.

The Incident: The theater canceled the planned production of the show prior to its opening following numerous protests by an organization of conservative Orthodox Christians. A local group called "Family, Love and Fatherland" also filed a complaint saying that the musical mocked religious faith.

Results of Incident: The decision by the theater to cancel the performance occurred amid a growing conservative movement and distaste for popular Western Culture in Russia.