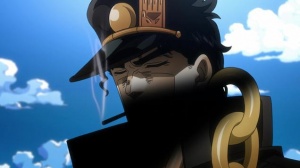 Description of Artwork: An anime cartoon character smoking a cigarette on a boat. The cigarette was censored with a black shadow covering the lower portion of the character's face, while the smoke trailing from the cigarette was left uncensored.

The Incident: The anime show "Jojo's Bizarre Adventure" aired in Japan with the lower half of a character's face blacked out. This was because the character, Jotaro Kujo, was smoking a cigarette in the scene. In the scene, only his nose and eyes are discernible, the rest of his face is covered in black to mask the cigarette. However, the smoke of the cigarette was left uncensored, making it clear to audiences what was going on behind the black shadow. The issue is that the character in the scene is 17 years old at the time, while the legal smoking age in Japan is 20 years old. In order to have its fictional character adhere to Japanese law, Jotaro's cigarette was censored before airing.

Results of Incident: The show was aired with the cigarette censored by the black shadow. Previous episodes of the show (and other Japanese cartoons) had characters smoking cigarettes without censorship, since the implied age of these characters was over 20.