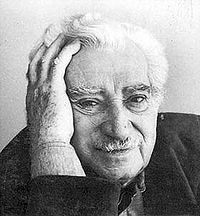 Description of Artwork: Amado is an infamous Brazilian Communist writer. Amado asserted that the inspiration for his books came from Brazil and the need for change.

The Incident: Amado's work has been censored at various times during his life. He was imprisoned in 1935 for his support for a left wing party called the National Liberation Alliance.

In 1937, after this organization attempted a coup, the government banned Amado's books and burned over 1,500 copies of his novels. His books were banned in both Brazil and Portugal. Amado escaped to Uraguay and Argentina, where he lived until 1942, when the ban on Amado's work was lifted. He was arrested and imprisoned shortly after his return.

In addition to his novels, a television program that he worked on, called Man's Hope, was banned in 1970. When the Brazilian government asked Amado to submit all of his original manuscripts for prior censorship, he refused and asserted that he would prefer to publish outside of Brazil than kneel to the censor.

Results of Incident: Amado's novels were banned and circulated as various Brazilian governments ebbed and flowed throughout his life. This did not hinder his success as a salient Latin American writer. Amado achieved international notoriety; his works were printed in 50 languages; in Brazil, he is national icon.