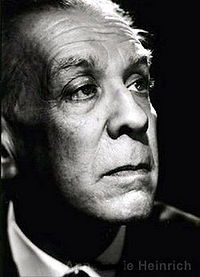 Description of Artwork: Borges wrote articles denouncing Nazi Germany, fascism and anti-Semitism in the magazine, El Hogar (the home), which he edited. His article "Definition of a Germanophile" criticizes Argentines who sympathized with the Nazi agenda. His most popular short story, "Tlon, Uqbar, Orbis Tertius," is about a planet that goes through drastic changes, a metaphor for the Nazi ambition for world dominiation.

The Incident: Borges related the manner that Peron took control of Argentina after WWII to the manner in which Hitler gained support in Germany during the 1930s. The year after Peron came to power Borges was forced to resign from his job as a library clerk at the National Library and demoted to inspect poultry and rabbits in a public market. In 1947 his mother was put under house arrest and his sister incarcerated for one month for listening to anti-Peron slogans near a protest.

Results of Incident: Borges eventually became an English teacher. He refrained from speaking out against the Peronistas.