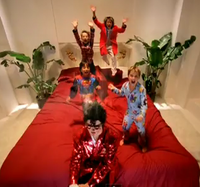 Description of Artwork: Eminem, the American rap artist notorious for insulting celebrities and cultural communities, created a music video for his song, Just Lose It, containing an image of himself disguised as pop-star, Michael Jackson. In the video, Eminem sat on the edge of a king-sized bed covered in red satin sheets with a group of children in pajamas dancing behind him.

The Incident: Michael Jackson voiced his opposition to the video, calling it "demeaning and insensitive." BET removed the video from its playlist after receiving complaints from Michael Jackson's camp.

Results of Incident: A spokesman for Interscope Records, Dennis Dennehy, announced that they were "sorry that BET made this decision."