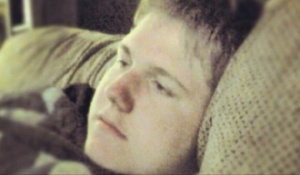 Description of Artwork: 19 year old Justin Carter made a Facebook comment that could be interpreted as either a "terroristic threat," or an spurt of anger with no intent to threaten or disrupt: “I’m fucked in the head alright / I think I’ma shoot up a kindergarten / and watch the blood of the innocent rain down / and eat the beating heart of one of them.”

The Incident: As a result of the post, Carter was in a Comal County, Texas jail for five months, waiting for trial, as Texas courts believed this to be a terroristic threat. Carter’s father and attorneys are demanding that the comment is read in its proper context, as it was spurred by a gaming feud between Justin and another player of the online game “League of Legends.”

Although his statement is of the same jargon that gamers use, authorities still believed it was a terroristic threat, which the Texas Penal Code defines to be any threat of violence intended to cause fear, public or private disruptions, or impairment of emergency services or public resources. These cases most often are aimed at specific individuals, but the term encompasses bomb threats or threats of poisoning, sabotage, or intention to commit violence. In terroristic threat cases, Texas state courts have stated that the crime requires proof that the person making the threat intended to place a person or group of people in fear of imminent bodily injury.

In Carter's case, the only person meant to feel threatened by Carter’s statement would be whatever fellow gamer initiated the cycle of trash-talk. Carter meant to instill a “fear of losing” in someone, a competitive act that is obviously protected under the first amendment. There are checks in place to flag the kind of speech that would suggest an attack or an act of terrorism is imminent. But Justin Carter was in jail for nearly 5 months for online speech that was definitely insensitive and imprudent but was not a terroristic threat meriting a $500,000 bail.

Results of Incident: A petition on Change.org for Carter has garnered over 10,000 signatures, and an anonymous donor has gotten Carter out on bail on July 11th. However, a July 3 press release from the district attorney noted that the charges against Carter may carry a punishment of up to 10 years in prison. In August, pretrial hearings of the case began. The next court appearance is set for October 24th.

What the verdict will most likely be is that his post was too ambiguous to be deemed a terroristic threat, but even if Carter is proven innocent of terroristic, threatening speech, the case will be a clear example of the chilling effect that web surveillance, coupled with a heightened sensitivity to violent remarks, can have on free expression on the web.

Facebook threat case back on track for trial, By Zeke MacCormackSeptember 4, 2015