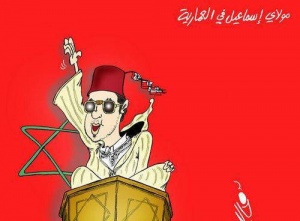 Description of Artwork: One of Morocco's most prominent cartoonists, Gueddar is the author of a number of comics aimed to satirize the Moroccan royal family. He has worked for various French and Moroccan newspapers, including Bakchich, Almassae, and Akbar el Youm. Most recently, Gueddar runs the satirical cartoon, "Le roi qui ne voulait plus être roi" ("The King who no longer wanted to be king"), which largely satirizes and excoriates Mohammed VI's absenteeism.

The Incident: On September 26, 2009, Khalid Gueddar published a controversial cartoon mocking Moulay Ismail, a cousin of Mohammed VI. This cartoon prompted the action of the Moroccan government, which ordered Akbar el Youm, the newspaper in which the cartoon was published, shut down just two days after the cartoon was printed. The government shuttered Akbar el Youm's offices in Casablanca and posted policemen at its entrance to prevent any of the newspaper's seventy employees from reaching their desks. The cartoon was alleged to "lack respect for the royal family," which, in Morocco, represents a punishable offense.

Results of Incident: Following the newspaper's closure, Gueddar was put on trial for his cartoon from September. In response, Le Monde, the French daily, published on its front page a biting cartoon by Plantu scoring Morocco for its repression on October 22; on October 23, the day of Gueddar's trial, Le Monde published the original cartoon by Gueddar. Morocco subsequently banned distribution of Le Monde that day and the next. In February 2010, a Moroccan court handed Gueddar a three-year suspended prison sentence. Gueddar has continued to publish his satirical cartoons.

On May 25, 2012, Gueddar was arrested by local police in the city of Kenitra for public intoxication and insulting the police. His trial is set for June 13. Many have speculated that his arrest was the result of Moroccan authorities' distaste for his cartoons.[1]