Last of the Believers (painting) 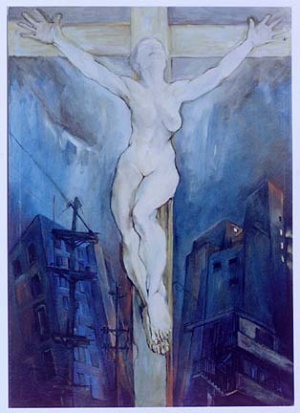 Description of Artwork: 'Last of the Believers' is a painting by Daria Fand that nude woman on a crucifix. The artist intended the nude on the cross to depict women's sacrifice.

The Incident: Marylucia Arace, chairwoman of the Committee on the Status of Women, stated that the painting by Daria Fand should not be displayed in the "Art of Women" exhibition at Honolulu Hale because it was too large and submitted too late. Other paintings submitted late were accepted. Initially, city officials told Fand her piece was inappropriate for children. Later, they told her it was banned because of its size and because it was submitted late.

Fand said she believed her painting was banned based on "the controversial nature of the woman being Christ-like."

Results of Incident: The ACLU sued the city in August, 2001. As part of the settlement, the painting was displayed at a March 16-31 Honolulu Hale exhibition featuring the art of women. "This is certainly a vindication of the principle that the government cannot censor art or speech based upon its content," said ACLU legal director Brent White.