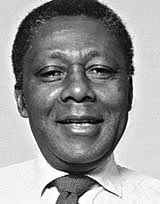 The Incident: In 1956 Cameroonian colonial authorities and Catholic Church officials banned Beti's Le Pauvre de Bomba (The Poor Bomba) A single copy was allowed to remain at the University of Yaounde. Beti moved to France and wrote Main Basse Sur le Cameroon (Grabbing Cameroon), which was also banned and confiscated by the French and Cameroonian governments. When he returned to Cameroon in 1993 he was refused permission to run for legislative elections.