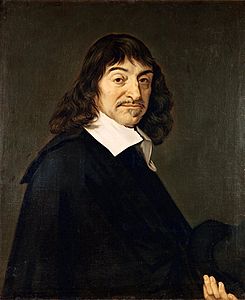 Description of Artwork: Les Meditations Methaphysiques, 1641: a more elaborate development of the fourth part of the Discourse on the Method, his metaphysical doctrine since the science of the physical world must, in his view, be based on the absolute certainty of the real world. Constructed as a single argument, each link is dependent on the previous in an elaborate "order of reasons."

The Incident: 1633, Holland: Descartes, a devoted Catholic, abandoned his treatise on Copernican beliefs when he learned that Galileo's treatise had been suppressed in Rome for supporting Copernicus's hypothesis of the earth revolving around the sun. 1663, Rome, Italy: Through the influence of Jesuits, this author's work containing Copernican theories were placed on the Index, and forbidden in many institution of learning until corrected or expurgated.