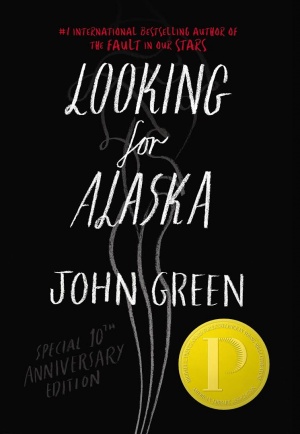 Description of Artwork: "Looking for Alaska" follows a boy as he transfers to a boarding school and befriends a new group of kids, central among which is a girl named Alaska, with whom he falls in love. The book is divided into two parts "Before" and "After," with a cataclysmic event dividing the two and affecting the lives of all the characters. Controversy generally surrounds a two-page oral sex scene as well as profanity in the book and underage drinking.

The Incident: Book was one of four proposed end-of-term reading choices in a junior year high school English course. Students voted on the book and were set to read it when a parent complained about sexual content and profanity in the book. Before it could be discussed by the principal and rather than accept an alternate assignment, the issue was taken above the head of the school to the school board and County Instructional Administration. It was promptly removed and banned throughout the county.

Results of Incident: Book banned in the county without official challenge, review or vote.

Similar objections led to the book being removed in Depew, NY, despite a permission slip already being required. That removal was subsequently reversed.