Love on the Dole (film) 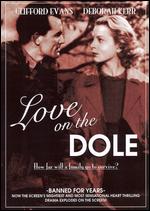 Confronting Bodies: The British Board of Film Censors (BBFC)

Description of Artwork: The film Love on the Dole was adapted from a best-selling novel by Walter Greenwood. It is a story about a family living in England during the 1930's depression. The lead character, Larry, is a socialist who wants to improve living conditions without accepting welfare payments. There are references to labor organization and prostitution in the novel and play.

The Incident: In 1936, John Baxter began preparing the screen version of Love on the Dole. The BBFC thwarted Baxter's attempts, denouncing the film as "very coarse and full of swearwords," showing, "the tragic and sordid side of poverty." Even the play suffered several deletions of "bad language." The BBFC saw the booming cinema industry as merely entertainment and not the proper medium for negative social portayals.

Results of Incident: The BBFC released the ban on the film version of Love on the Dole in 1941, suggesting that times had changed and that unemployment was no longer a controversial issue.