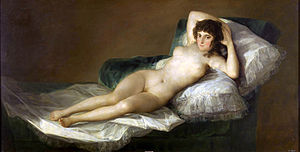 Description of Artwork: Two of Goya's pieces which are known to have aroused the anger of the censors of the Inquisition are Maja Desnuda (1800, Naked Maja) and Maja Vestida (1808, Clothed Maja). These were unusual pieces for Goya which presented a woman lying on a bed, and, in the case of Maja Desnuda, a naked woman lying on a bed. Especially scandalizing to the Inquisitors was the naked Maja's visible pubic hair. Anther piece which may have been censored and angered the royal court was Los Caprichos (1799, The Caprices), which was a satirical, unflattering portrait of the family of Charles IV.

The Incident: Maja Desnuda and Maja Vestida were both held in the "private cabinet" of the disgraced former chief minister of Spain, Manuel de Godoy. Godoy was hated in Spain for both his decadence and his part in Spain's collapse during the Napoleonic wars, which led to the abolition of the Inquisition by the French monarch, Joseph Bonaparte. When Bonaparte was deposed and the Inquisition was reinstated the Inquisitors were only too happy to bring to light Godoy's seedy habits, including the two paintings by Goya. The paintings were also considered especially scandalous because in the prudish, religious Spanish culture the nude was hardly ever portrayed in art. There had also been a recent surge in the popularity of pornography which the Inquisition was alarmed about. Goya was summoned to appear before the Inquisition to explain the works. The Inquisition, however, was not as powerful as it had been before the Napoleonic Wars, and it seems that Goya might have chosen to not appear before the Inquisition because there is no further mention of him in the Inquisition records. In 1825 Goya received a request for a copy of his satirical court portrait Los Caprichos. In Goya's reply he wrote "...they nevertheless accused me before the Inquisition, not would I copy them myself..." The glancing reference to censorship is taken by some to mean the work was censored, although it is more commonly accepted that Goya was referring to the censorship of the Maja paintings, which may have made him less popular with the royal court.

Results of Incident: The Majas paintings were taken to the Royal Academy sometime after the Inquisition was abolished and its assets distributed in 1835. The Clothed Maja was kept in another "private cabinet" for a number of years and The Nude Maja was not available for viewing until a Goya exhibit in 1900. In 1901 both paintings were acquired by the Prado.