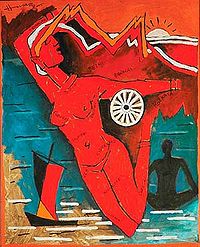 Description of Artwork: Husain's paintings feature the Hindu goddesses Saraswati, Draupadi and Sita in the nude.

The Incident: Members of the Vishwa Hindu Parishad complained of Husain's paintings. The government, dominated by the Bharatiya Janata Party, gave permission to Delhi police to investigate Husain. Their charge was insulting the Hindu religion.

Results of Incident: Husain has had his home in Bombay attacked by Hindu militants because of his work.