Messages to the Public (public art) 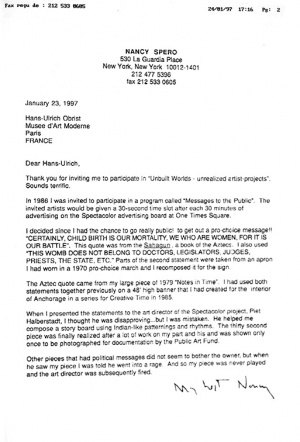 Description of Artwork: From 1982 to 1990, the Public Art Fund produced the public art project “Messages to the Public” inviting a different artist each month to create a recurring 30-second animated piece that would run every 30 minutes after the regularly scheduled, paid-for programming. Some of the pieces used text. In 1986, artist Nancy Spero was invited to contribute a piece, and she decided to use it to spread a pro-choice message. Her opiece used two quotes: CERTAINLY, CHILD BIRTH IS OUR MORTALITY, WE WHO ARE WOMEN, FOR IT IS OUR BATTLE from the Sahagun, a book of the Aztecs, and THIS WOMB DOES NOT BELONG TO DOCTORS, LEGISLATORS, JUDGES, PRIESTS, THE STATE, ETC., recomposed from an apron Spero wore in a 1970 pro-choice march. The Aztec quote came from her 1979 piece "Notes in Time". She had used both statements together previously on a 48' high banner created for Creative Time's Art in the Anchorage program in 1985.

The Incident: The owner of the Spectacolor, who was Catholic, objected to Spero's viewpoint and message, and censored her completed digital project.

Results of Incident: The owner of the Spectacolor fired Piet Halberstadt, the director of the project.

The Public Art Fund photographed the piece was for documentation, but it was never realized. Documentation is held in the Fales Library at NYU.

The Times Square Pro-Choice Art Piece That Was Censored, But Not Forgotten. In 1986, artist Nancy Spero conceived a pro-choice message for Times Square's 'Spectacolor' billboard. But its Catholic owner was determined that Spero's artwork would not be seen, The Daily Beast, Jan 19, 2019