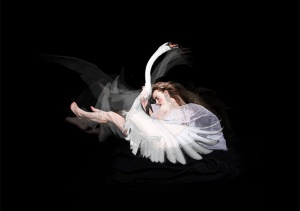 Description of Artwork: Derrick Santini's exhibit "Metamorphosis," included an image that depicts the story of Leda and the Swan, a myth in which Zeus transforms into a swan and rapes the human, Leda. Santini's rendering of the ancient Greek myth was displayed in the gallery's window.

The Incident: There were no complaints from the general public about the open display of the image, but the Metropolitan Police took issue with the piece. An officer who saw the piece visited the gallery to demand the piece's removal. The gallery owners asked why the police demanded the removal of the piece, to which the police said that it implied and condoned bestiality, which they thought to be a punishable offense.

Results of Incident: The exhibition was over by the time the police showed up, but the owner of the gallery said that she did not know what they would have done had they come earlier and demanded the piece's removal.