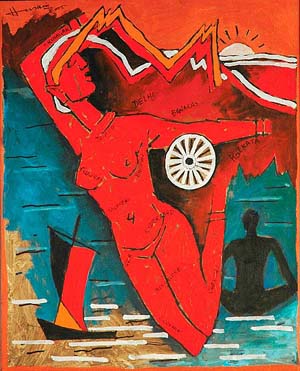 One of Husain's most contentious paintings, "Bharatmata" [1]

Description of Artwork: The exhibit was to commemorate the one year anniversary of artist Maqbool Fida Husain, widely considered one of the greatest Indian artists.

The Incident: The Hindu Jan Jagriti Samiti, an conservative Indian organization, strongly voiced its opposition to the exhibition. "Shivaji Vatkar of the HJJS wrote to organiser and gallery curator Raju Sutar, claiming that Husain had 'hurt the religious and national sentiments of crores of Hindus and Indians through his blasphemous paintings of Hindu deities and Bharat Mata,' and hence the exhibition should be stopped." [www.thehindu.com/news/states/other-states/article3516428.ece]

Results of Incident: Fearing violence, the show organizers as well as curator Raju Sutar decided to cancel the exhibition.