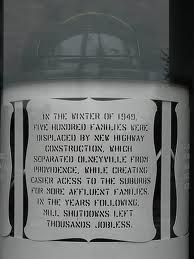 Description of Artwork: The four trash can designs describe the artists conceptions of Colonization, Exploitation, Disintegration, and Gentrification.

The Gentrification design, for example, says:

"In the beginning of the 21st century, with the financial and political support of the City of Providence, private developers purchased much of the industrial property in Olneyville, creating luxury living in the citys poorest neighborhood. How will we right this wrong?

When Struever heard about the program, the developer donated $25,000 for whatever displays the local organizations saw fit to create, with no conditions.

Among the ideas was a project to create a series of 20 trash cans, created by local artists, administered through the Steel Yard. The Steel Yards Howie Snieder picked five of the groups artists, and asked them for ideas.

Among them was Lu Heintz, who founded the blacksmithing program at the Steel Yard.

Heintz submitted several early sketches of the cans: she planned to use text, wrapping around the receptacle, to present relevant facts about Olneyville. One sketch gave the definition of the word Woonasquatucket, the former name for Olneyville. Another referenced the number of manufacturing workers the neighborhood used to have. The director of OHC was satisfied with the early designs.

When the trash cans were completed, however, OHC rejected the work, saying that it was not in line with the conceptual designs they had seen.

Results of Incident: The trash cans remain at the Steelyard, while other cans that were ordered have been installed.