One Flew Over the Cuckoos Nest 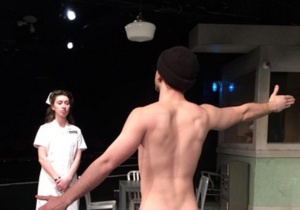 Description of Artwork: One Flew Over the Cuckoo's Nest, written by Ken Kesey in 1962, is set in a psychiatric hospital in Oregon. The book's narrative examines psychiatric institutional processes as well as the human mind. The book, which is frequently read in high school classrooms across the country, has been adapted into many theatre productions as well as an Academy Award winning film.

The Incident: Burgess Clark, Artistic Director of Boston Children's Theatre for nine years chose to do a production of One Flew Over the Cuckoo's Nest. The well known play was performed in late April and achieved critical and box office success. In his adaptation of the controversial narrative, there was a scene that contained brief nudity. Clark was scrupulous in warning his audiences of the nudity as well as adult language, but despite the ample warning and the success of the play, two board members demanded that Clark removed the scene in which there was nudity, however, Clark refused to remove the nudity from the play.

Results of Incident: Shortly after Burgess Clark's refusal to remove a scene containing nudity in his production, members on the board of Boston Children's Theatre decided to indefinitely suspend Clark, artistic director of nine years.

Petition for the Reinstatement of Burgess Clark